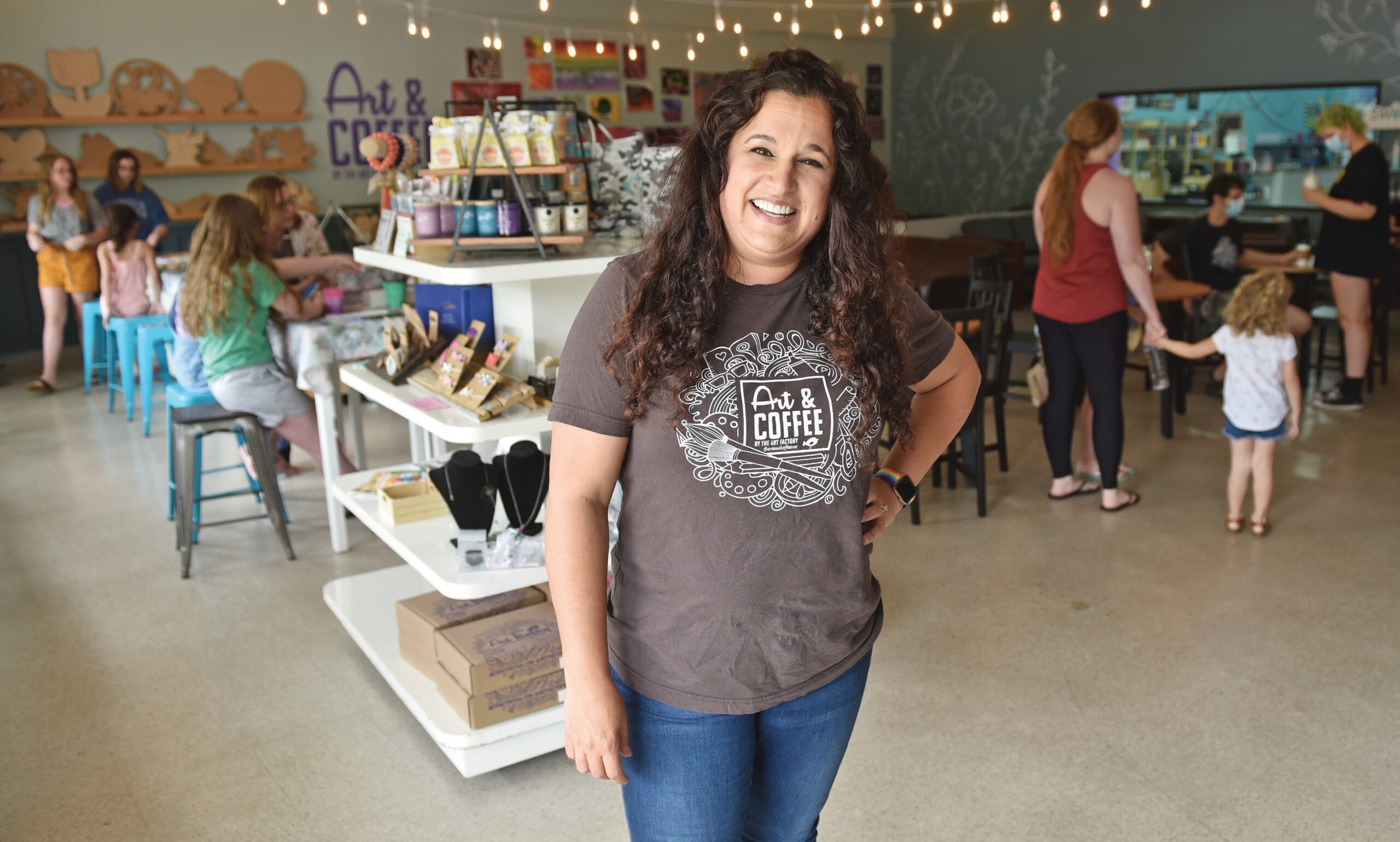 Art Factory & Party Place / Art and Coffee didn’t open as a place to have a cup of coffee, but it eventually made sense to serve some, so Tal Thompson did.

By her own admission, a selfless student, the Israeli immigrant was expelled from a standard school – then thrived in a school where she could pursue an artistic education. After mandatory service in the IDF, Thompson landed a job with the US military at the USO in Haifa. There she fell in love with an American biomedical engineer and, after 18 months of long-distance dating, moved to Georgia, married him, earned a degree in design at the Art Institute of Atlanta, and had two children. Thompson has used her graphic design talent in corporate positions to freelance on catalogs for clients like Bloomingdale’s. To make money on the side, she imported temporary tattoos from Israel and sold body art supplies to friends and neighbors from her kitchen table.

When the economy crashed in 2008, work in graphic design dried up and the Thompson family moved to Richmond, where her husband Cliff had landed a job. She found work as a creative director for political strategists at a direct mail marketing company, but after three years she had had enough. By 2012, she was ready to market her own products and savvy enough to design a website to sell them.

“I started working full-time to grow this body art business… face paint and other makeup products used primarily by artists,” she says. Before long, the online operation was too big to run outside of their home. Thompson rented a small space at the Market Square mall. It was near their home in Brandermill and a foray into bricks and mortar sales.

Thompson was pleasantly surprised by the response. “What happens when you open a door to the community? The community is coming! And not only do they come, they tell you what to do…” The biggest request was for Thompson to entertain kids with face painting and art at parties. This is how the Art Factory was born. “A party space allows you to organize these events… I don’t need to run. They come to me. My stuff is here, right? Much easier.”

The community welcomed newcomers. Soon Thompson was also offering art classes and art workshops. In 2018, Tal decided to expand from 2,600 to 12,000 square feet, accommodating larger party rooms and studios, and a huge play area inside the lobby, where they would also sell coffee. . Thompson thought the cafe would be a good way to appeal to moms with preschoolers. The renovations took eight months. The Art Factory reopened in December 2019 – just before the global COVID-19 pandemic.

By the time Thompson was forced to close in the spring of 2020, online sales had also dried up. Who needed makeup and body paint when shows around the world were suspended? Thompson had paid for the store’s renovations out of pocket, so the operation was debt-free, but several dozen employees were on payroll and rent was still due.

She was fearless. “In times of crisis, there is also the birth of opportunity,” says Thompson. Using samples from a friend, Thompson turned his staff into a balloon delivery service, throwing birthday parties for housebound boys and girls. It has also reoriented its offer of body decorations. “Parents were always stuck at home with their kids, so we started putting together art kits. Our makeup store had all the brushes with our brand on them. ‘factory with all step-by-step instructions and supplies. [Paycheck Protection Program] the loans helped to cover the wage bill. 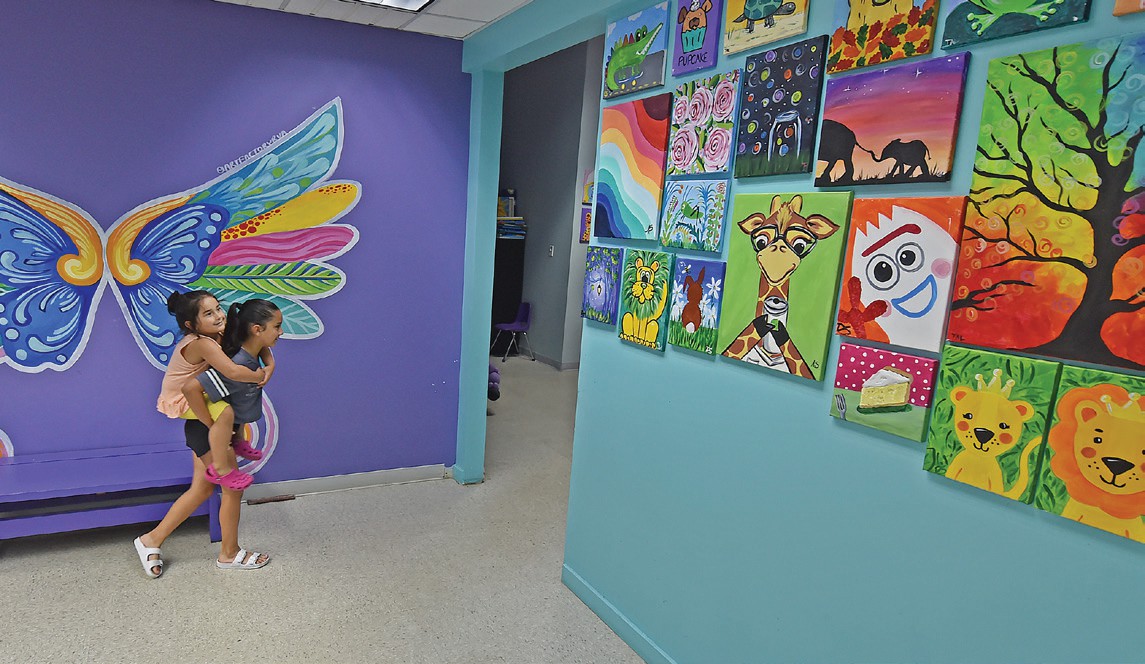 The Market Square shopping center business in Midlothian operates daily from 7am to 6pm, with later hours at weekends. ASH DANIEL

In fact, opening the store was a bigger challenge. The art studios were not classified as an “essential” business by the government. Nor the play area Thompson had inside the entrance. But the restaurants were. Moving the play area into a separate room allowed it to move Art Factory & Party Place (now with Art and Coffee) into the foodservice category. “So our coffee is our COVID baby,” she explains. And it’s flourishing.

Thompson attacked the coffee business with the same vigor that she sells tattoos, makeup, art lessons and balloons. It has partnered with Guide coffee roasters for its supplies (and essential know-how), and other locals for bread and cake pops. “He started making money the first month,” she says. “We added a coast to this crazy operation in order to capture our own traffic. If we take 45 kids to camp, that’s 45 families going in and out. And there’s always a totally cool community that just comes in for a coffee and sits down with their laptops and works. There are also merchandise for sale at the counter, from jewelry to soap, and of course, art. The shop is open 7 days a week, Monday to Friday from 7 a.m. to 6 p.m. and weekends from 8 a.m. to 6 p.m.

Thompson credits her success to keeping a close eye on her customers. “My dad owned a shoe store, so I grew up learning how to sell as a kid. But what I learned here in the States was more about the art of selling…from s “to sit down and observe our customers and see what they need and try to meet those needs. Everything we add has great intent. It either has to make sense as part of our process or have meaning because it serves the community.