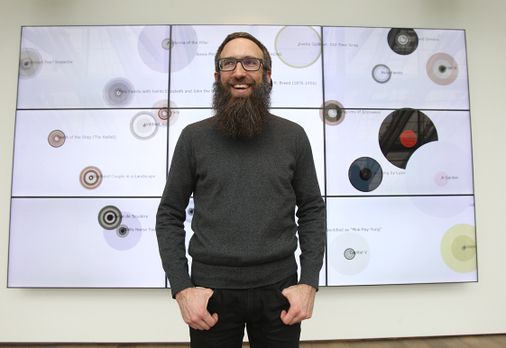 When big data meets the appreciation of art

The result is “Explorer of SunsÂ», A digital project that analyzes the colors of works of art by presenting them in sets of concentric circles. Featured in the museum’s Lightbox gallery starting April 18, â€œSuns Explorerâ€ serves to spark the imagination and engage visitors in conversations, Steward said. The hope is that after seeing it, visitors can approach the pieces in the collection with a more critical eye, paying more attention to color characteristics, ranging from general patterns to specific saturations. How do these choices reflect the artist’s purpose in creating the work?

â€œThe objects themselves are so much more than the physical thing you see when you’re here,â€ Steward said. “It’s the data, it’s the stories, it’s all of these things layered on top of what we think of as the object that makes it what it is.”

â€œSuns Explorerâ€ creates circles made up of multicolored rings from the collection’s colorimetric data, drawing on the approximately 1,500 works on display as well as the 226,000 available online. The exact hues are taken from the raw data – the hexadecimal codes or six-digit numbers used to represent a color – from the page of each artwork in the museum’s database, and the widths of the rings are determined by the percentage of each shade in the market alone. Such visualization helps transform huge tapes of data into an easily accessible presentation for museum visitors.

With Van Gogh’s “Self-portrait dedicated to Paul Gauguin, Painted in 1888, the thicker ring is a cool green due to the expanse of the background, with a brownish ring drawn from the color of the subject’s clothing. The self-portrait labeled circle is just one of the thousands of pieces of data that â€œSuns Explorerâ€ extracts. Every second, or maybe faster, a new circle will appear in the center of the nine-panel screen and move in a random direction. Eventually the circles begin to overlap.

â€œWe really just have these interfaces to intrigue people and attract them in different ways,â€ Steward said. â€œIt’s not that complicated, when you think about it. We have data, we have information about the colors, the color that is in the images of the works themselves. Let’s do something with it.

Located on the fifth floor andEnclosed in glass walls, the Lightbox Gallery showcases digital projects and often highlights the intersection of traditional art and innovative technology. A common misconception about space, according to Rabb Curatorial researcher Chris Molinski, is that its data visualizations replace the experience of going to the museum. Instead, the purpose of the Lightbox is more complementary.

â€œWhat I particularly like about Jeff’s project is that it immediately challenges that assumption and confronts the viewer with something different from seeing the object in person and demands that you go visit the original thing, â€Molinski said.

Haskell added that experiencing color data in this manner adds another layer to the experience of seeing an object in person, encouraging “a certain amount of critical struggle.” After seeing Van Gogh’s self-portrait, a visitor may wonder why he chose green as the predominant hue.

Next to â€œSuns Explorerâ€ in the Lightbox will be Haskell’s â€œsonificationâ€ of the project, designed for the visually impaired or simply curious to explore color information through sound. When images appear on a screen, a sound is emitted from the machine. The pitch of each sound is scaled to colors – low notes signify warm, earthy tones while higher notes represent cooler tones – and volume reflects the saturation of a color. The echo of a sound correlates with the size of the object represented.

â€œIt all builds on Jeff’s work, making all the data available. . . . It’s data about art that has an unusual amount of punch and an unusually visceral quality, â€Haskell said.

Steward added, â€œWe’ve had a lot of conversations about how an art museum is such a visual place. How to appeal to these other senses? There are so many other things going on.

The raw data used in ‘Suns Explorer’ is accessible to everyone via the Harvard Art Museums’ Application programming interface, or an online service that allows developers to create their own visualizations based on the data collected. Associated with Haskell’s sonification, the installation testifies to the museum’s goal of democratizing the process of engagement in art.

â€œMaking the data accessible, making the images accessible, providing the source code for these objects so that people can go and explore on their own, that’s just that – leveling the playing field,â€ Steward said. â€œThere are authoritative voices here and there, but that shouldn’t stifle other voices. Art is very subjective, so let’s engage and have different conversations around the objects in the collections.

Sonia Rao can be contacted at [email protected] Follow her on Twitter@misssoniarao.