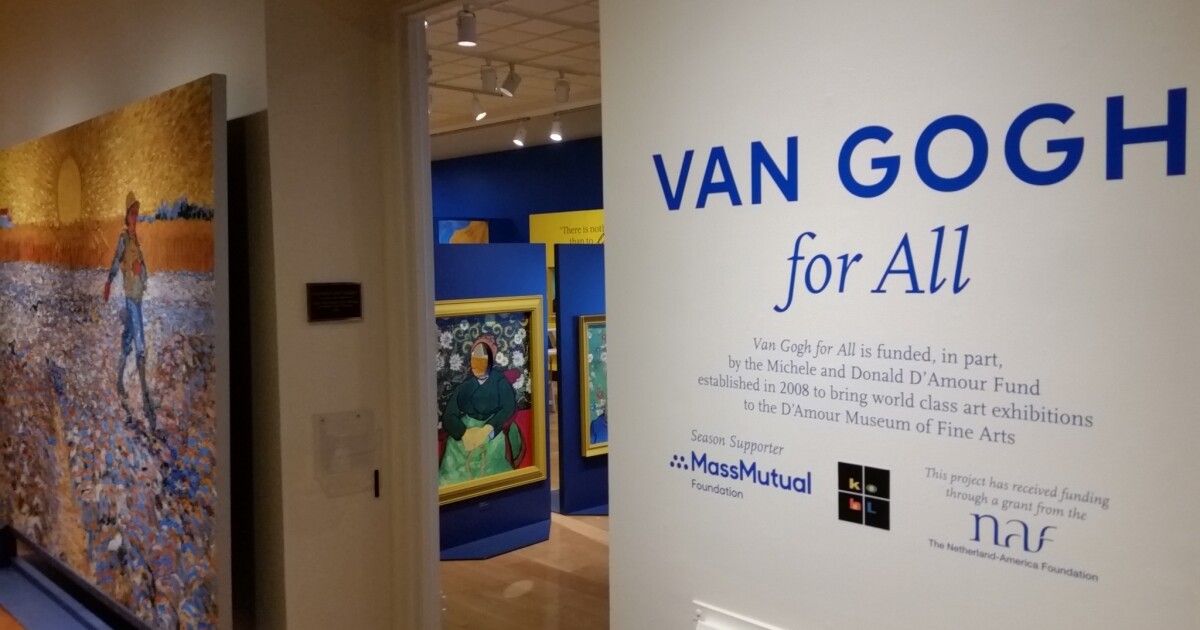 A traveling art exhibit has been established in western Massachusetts that uses 21st The technology of the century to showcase the 19 most famous in the worlde Painter of the century.

During the ‘Van Gogh for All’ exhibition at the Springfield Museums D’Amour Museum of Fine Arts, visitors can stand in front of a blue wall and be transported to Vincent van Gogh’s Starry Night, or handle the painter’s most famous Dutch post-impressionist working on a 12-foot-wide electronic screen.

â€œThe world loves Vincent van Gogh and here is a way for a larger part of the world to engage with him and I hope it will get them into fine art museums and get them thinking about the art of a different way, â€said Lou Bank, COO. Officer of the Dolores Kohl Education Foundation, which developed the exhibit.

He said there are places where people can sit and draw a self-portrait, step into a van Gogh landscape, or take a selfie with a sunflower.

â€œWe have a section configured to look like what might have been van Gogh’s studio so you can see what his world might have looked like and there is a three-dimensional version of his bedroom to give an idea of â€‹â€‹how he played with perspective to make his work of art a work of art. So if you dig into that, it’s also a scientific view of his work of art. “

Van Gogh for All premiered at the Houston Art Museum last March. Bank said the response was “gratifying”.

â€œIn Houston, people were blown away by Van Gogh for All,â€ Bank said.

The Springfield Museums are the first stop for the traveling exhibit on the East Coast.

Regina Walat, a retired teacher who volunteers as a tour guide at museums in Springfield, said she hopes the exhibit will generate more interest in art museums.

â€œI think it’s wonderful,â€ Walat said when asked about his first impression of the exhibit.

â€œWhen we first learned that the Van Gogh for All exhibit was going on tour, we immediately tried to schedule it for the museums in Springfield,â€ said Simpson.

In a gallery adjacent to Van Gogh for All, a complementary exhibition explores the influence of Japanese art on van Gogh’s painting. It features authentic Japanese prints rarely seen from the Springfield Museum’s own collection.

Both exhibitions are scheduled until October 14e.