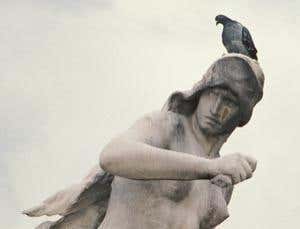 The pigeons make the note to the appreciation of the art

Parents can rent their children’s artwork as if each piece were a da Vinci or a Rembrandt – but pigeons, new research shows, are a little more picky.

Several birds have managed to tell the difference between well-executed paintings and rough paintings – all created by children aged 9 to 11 at an elementary school in Tokyo.

No, the city has not devised a plot to both rid its streets of pigeons and employ art teachers who work for peanuts – or rather grain. Instead, the experiments were set up to see if other animals, with sufficient training, could grasp the human concept of beauty, says Shigeru Watanabe, a psychologist at Keio University in Tokyo, who led the study.

Peck for a price

This is not Watanabe’s first effort to teach pigeons appreciation for art. In 1995, he and two colleagues published an article showing that pigeons could learn to distinguish Picasso’s paintings from those of Monets – a work that earned him that year. Ig Nobel Prize. New Scientist plays no role in selecting winners, but Watanabe’s latest study argues for another prize.

He trained four birds – on loan from the Japan Carrier Pigeon Society – to appreciate children’s art by associating correct appraisals of paintings with food. The works judged to be good (see image) had obtained Aces in art class, while the bad paintings (see image) had obtained Cs or D. Watanabe also submitted the paintings to a jury of 10 adults, and the pigeons have seen only works unanimously declared good or bad by the jury.

After a series of training sessions consisting of an average of 22 paintings, Watanabe presented the birds with 10 paintings that they had never seen before: 5 bad, 5 good.

The birds had been trained to peck a button for good pictures and do nothing in response to bad jobs. With unseen works, pigeons chose good paints twice as often as bad paints, a statistically significant difference.

However, their accuracy was significantly reduced if Watanabe presented images that were grayscale or those altered to be highly pixelated, suggesting that the color and detail helped the pigeons to discern the paintings. The size of the painting, on the other hand, made no difference.

In separate experiments, Watanabe found that pigeons could also learn to distinguish between pastel paintings and watercolors, suggesting that texture is another important clue for birds.

But does that mean humans and pigeons have a similar sense of aesthetics? Not quite, says Watanabe. “The experiments demonstrated the ability to discriminate, not the ability to love painting.”