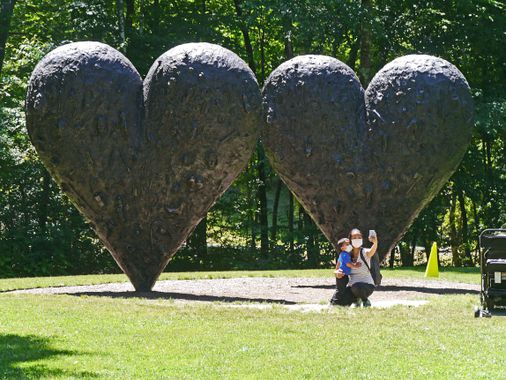 Sculpting an outing: the appreciation of art extends beyond the walls of the museum

The deCordova is possibly New England’s best-known and largest sculpture park. On a recent summer morning, parents and grandparents crawled behind young children roaming the 30 acres of lawns, forests, meadows, gardens and terraces on the hillside above Flint’s Pond – itself a glow of blue water through the trees.

Families ranged from sculpture to sculpture. There are about 60 on display. Some rooms were on a modest human scale, but many others loomed above the children like gentle giants in the park-like landscape. One of the great attractions of deCordova is the ability to engage closely and personally with art. Touching the work is not recommended, but there is no rule that says you cannot get closer than 6 feet. Instead of looking at the sculpture, you are in the presence of the sculpture, communing in the open air.

Art also adapts your senses to the landscape. DeWitt Godfrey’s “Lincoln” (2012) appears to flow down the hillside from the museum building on the ridge to the meadow on the entrance road. From a distance, it ripples like a ribbon candy, seemingly so fluid it could crumble at any moment. Up close, the heavy bands of Cor-Ten steel appear as permanent as the hillside.

Picnics are encouraged at deCordova, and if you’re visiting on a weekend and don’t want to pack your own, you can pre-order meals until Wednesday of that week. The picnic menu is limited, but it’s only fresh produce packaged by the family-owned Real restaurant in Lincoln. See shopthetrustees.org/products/decordova-picnic-lunch.

51 Sandy Pond Road. Entry slots every hour from 10 a.m. to 3 p.m. Entrance and parking $ 15 per vehicle by reservation in advance only: eventbrite.com/e/decordova-sculpture-park-entry-and-parking-tickets-102282939024; Reservation free for members of Reservations Administrators and Lincoln residents. 781-259-8355; decordova.org. Check the website for updates on the opening of the museum.

Visitors are also welcome to picnic at Forest Hills. The cemetery-garden, created in 1848, remains one of the most beautiful and calming landscapes in the city and the repository of major memorial sculpture. One of the most famous pieces in the cemetery is Daniel Chester French’s masterful “Death Remains the Sculptor’s Hand” (1892), located just inside the main gate.

The best place on the lot to spread out a picnic is in the center of Hibiscus Lake. Plus, it’s also a good starting point to look for the small collection of contemporary sculptures that dot the 275 acres of the cemetery. One of the perks of trying to find all of the rooms – detailed on a map available inside the main gate – is that you invariably come across some of the cemetery’s wildlife. It could be the woodpeckers feasting on insects in the wooden bases of “Poetry Chairs” (2003), a collaboration of sculptor Mitch Ryerson with poet Elizabeth McKim and local school children. Or it could be the ancient Snapping Turtle paddling the shallows of Hibiscus Lake or the majestic Blue Heron fishing from the small island in the middle. At the edge of the lake, the silvery “Flock of birds” resembling a reel (2000) by George Sherwood evokes all the feathered creatures of Forest Hills.

There is a gentle spirit in some works. Easily overlooked on a small rocky outcrop under lush foliage, Christopher Frost’s “Neighbors” (2006) recalls some of the graveyard’s illustrious dead with concrete models of their homes. Bostonians evoked in this fairy-tale neighborhood range from modern poet Anne Sexton to cart driver Ralph Martin, who perished in the Great Molasses Flood of 1919.

It’s a good thing that MIT students are so smart, because navigating their campus is a bit like reaching level 11 in an online quest game. Even the buildings named are numbered and the streets take on particular angles where the school meets the Charles River.

But it is worth it. MIT’s List Visual Arts Center oversees an impressive collection of modern sculpture, much of which is tucked away in secluded courtyards and grassy quads. Large-scale sculpture lives at the crossroads of art and architecture, and technology has always been a school of the imagination. As you might expect, the list has an online app to guide you (listart.oncell.com/en/index.html). It’s GPS enabled, so information about every important sculpture or building you walk past is displayed on your phone.

The easiest place to start is with Jaume Plensa’s “Alchemist” (2010) outside the student center along Massachusetts Avenue. Beyond MIT’s playgrounds along Amherst Alley, Tony Smith’s “For Marjorie” (1961) harnesses mathematical complexity to produce a figure that changes dramatically from all angles. This is one of the earliest pieces in the MIT collection, while one of the most recent is the Sean Collier Memorial (2015) by J. Meejin Yoon at the Vassar Street entrance to Frank’s multicolored cubist mishmash. Gehry, the Ray and Maria Stata Center. With breathtaking grace, the sculpture pays homage to the MIT officer who shot and killed on April 18, 2013. Unsurprisingly, this is a wonder of digitally assisted composition. The five-armed stone vault consists of 32 granite blocks held in place only by compression to create a powerful marker of a place that will never be the same again.

The summer residence of sculptor Augustus Saint-Gaudens and his painter wife, Augusta, was the center of the party for the Cornish Art Colony, a group of artists and intellectuals. Stories from the period mention lawn bowling, picnics and amateur theaters. Amid all the socialization and pursuit, Saint-Gaudens has managed to create some of the most enduring sculptures in American art.

Buildings in the park, which is operated by the National Park Service, are closed for now, but grounds and trails are open. It is a splendid place to appreciate the sloping lawn and imagine the terrain filled with laughter and frivolity. Although many casts of major works by Saint-Gaudens remain behind closed doors, it is still possible to see some of his masterpieces outdoors.

Installed in its own pavilion, the Farragut Monument (1881), the artist’s first commission, caused a sensation when it opened in Madison Square Park in New York. It kicked off his career as a preeminent maker of American monuments at a time that desperately wanted heroes. The “Standing Lincoln” (1887), newly cast and installed in 2016, was the first life-size sculpture that the artist created entirely at the Cornish studio. Showing the president in all his caring humanity, he portrays Lincoln not as the great emancipator but as a thoughtful national leader with serious demeanor. Perhaps the most familiar masterpiece, at least to Bostonians, is the Shaw Memorial (1897). Since the original on Beacon Street is being restored, this is a great opportunity to review this final version to appreciate the mighty determination of the soldiers of the Massachusetts 54th Regiment of Afro-American Volunteers.

139 chemin Saint-Gaudens. Grounds and trails open daily from dawn to dusk. Free until the buildings open and the programs resume. 603-675-2175, nps.gov/saga. Check the website for updates on the opening of the house and studios.

Patricia Harris and David Lyon can be reached at [email protected].