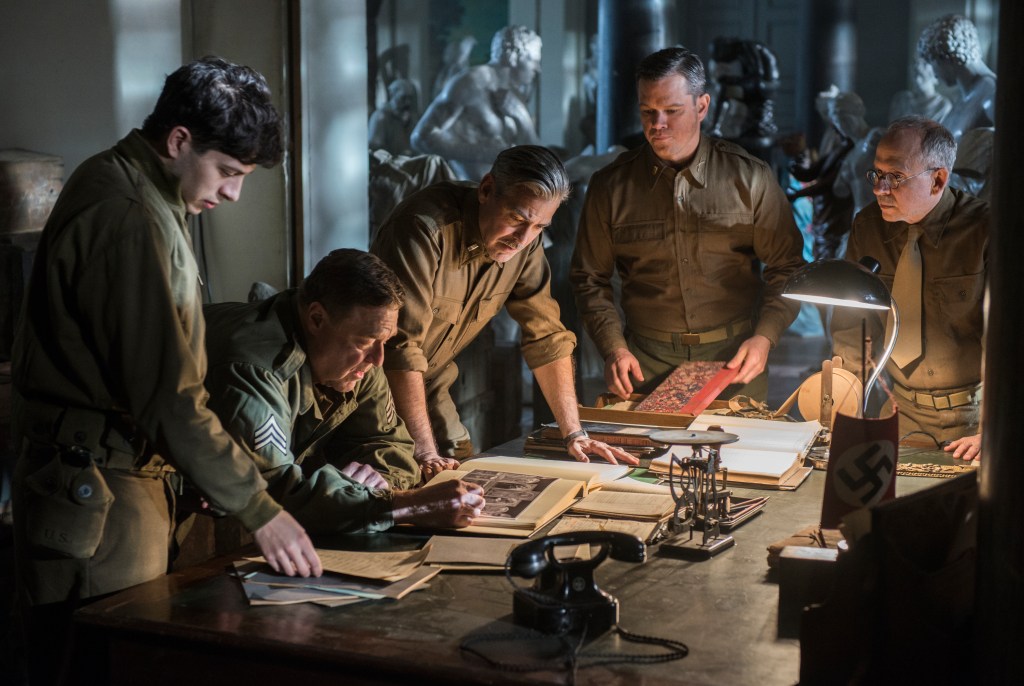 It is not just the great works of European art that disappeared in “The Monuments Men”; the cinematic spark of star writer-director-star George Clooney is also missing. By adapting writer Robert M. Edsel’s account of the men charged with protecting the aesthetic treasures of the Western world from wartime destruction, Clooney turned a compelling real-life tale into a seminar of appreciation of the overly boring and dreary art and art – a museum piece film about the people of the museum. Featuring a star-studded cast and top-notch artisan contributions across departments, this seemingly expensive Sony / Fox co-production is set to surpass the $ 75 million worldwide gross of Clooney’s previous round in the director’s chair (2011 “The Ideas de mars “), but is no more than a footnote in his remarkable filmography.

When Clooney started out as a director, it was clear that he had learned a lot about the technique through his many collaborations with Steven Soderbergh and his first two feature films, “Confessions of a Dangerous Mind” (2002) and “Good Night. , and Good Luck “(2005), were overwhelming evidence that the pupil could be as good as the teacher. Although widely divergent in tone, these two films were inventive biopics set against the backdrop of live television production – a world in which Clooney grew up – and “Confessions” in particular seemed stylistically informed by the fast pace and self-reflexivity of live television. But “Ideas of March” and now “Men at Monuments” love movies directed by anyone. ‘another: conscientious prestige images and establishment with “big” ideas communicated in a surprisingly literal way. In short, if Clooney started out as Soderbergh, q Somewhere along the way he seems to have become ’80s Norman Jewison.

Between “Good Night” and “Ides,” Clooney directed “Leatherheads,” a stab in the wacky ’30s comedy that was reliable at Howard Hawks’ halftime beats. And with “The Monuments Men,” Clooney seems to be aiming for something slightly Hawksian again, taking on the role of Frank Stokes, the Fogg Museum art historian who designs the Monuments, Fine Arts and Archives program ( MFAA) and ultimately finds the performer himself. We are in the spring of 1944, a few weeks after Allied bombers destroyed a 5th century abbey in Monte Cassino in Italy, mistakenly believing it to be a Nazi stronghold, and despite a presidential decree stipulating that the sites historical and artistic significance were not to be bombarded. The only solution offered by Stokes (who leans on true Fogg curator and environmentalist George Stout) is to create an elite corps of art world experts who will go to the front lines and advise the commanders, while working to recover the thousands of works of art stolen by the Nazis from private Jewish collections and museums, many of which were destined for Hitler’s planned Fuehrermuseum in his hometown of Linz.

So, like a Nick Fury with a brush, Stokes begins to gather his team: expert art restorer James Granger (Matt Damon); Chicago architect Richard Campbell (Bill Murray); sculptor Walter Garfield (John Goodman); theater impresario Preston Savitz (Bob Balaban); a disgraced British museum director (Hugh Bonneville) who needs a second chance; and a former professor of painting at the Ecole des Beaux-Arts (Jean Dujardin) in gay Paris. Middle aged and out of shape, they stand out like a Picasso in the cloisters when they show up for basic training in England, but then they were recruited for their brains, not their muscles.

Despite all his talk about art as “the very foundation of modern society” and his solemn sermons like “Who will make sure the statue of David is still standing, the Mona Lisa still smiling?” It is one of the curiosities of “The Monuments Men” that so few works of art appear on screen during the two hours of the film. During much of this time, our heroes travel here and there in the footsteps of two particular masterpieces: the Virgin of Bruges sculpted in marble by Michelangelo and the 12-panel altarpiece by Flemish masters Hubert and Jan van Eyck “The Adoration of the Mystic Lamb”, both captured by the Germans during the war. But aside from these treasures, themselves glimpsed in a fleeting way, the film tends to talk about art in general rather than specific terms.

The MFAA men themselves are made equally vague. While Edsel’s book bristled with living individuals, many of whom were friends or enemies of their civilian lives in the art world, the characters that Clooney and his regular screenwriter partner Grant Heslov made of them feel sketched at best, as if their personalities have been swapped. away with their real names. Indeed, just about everything Clooney and Heslov have done to make Edsel’s sprawling tale more cohesive and cinematic has the effect of just making things bland. The heated quarrels on the battlefield between the monuments and the men of the army over the relative value of art and human life have largely disappeared, replaced by invented scenes like the one in which a man of monuments sacrifices himself. courageously in an unsuccessful effort to save Our Lady. (Actually, a few MFAA workers died in the combat zone, but none so romantically.) It’s like a men-on-a-mission movie tailor-made for audiences who found “Inglourious Basterds” too irreverent.

Clooney’s Stokes is like a more tame version of the acerbic special forces officer he played in another wartime scavenger hunt, David O. Russell’s “Three Kings” – the good-natured, shriveled kind of man. world that Clooney can act in his sleep (which he sometimes seems to be doing here). Damon, meanwhile, is quite too laid back for a man who supposedly spends his days doing infinitesimal retouching to decaying artistic masterpieces. Her poor command of French becomes one of the film’s common jokes, but no one ever mentions Cate Blanchett’s tortured Gallic accent as Claire Simone, assistant curator at the Jeu de Paume museum in Paris who knows more about the where the stolen art is located than initially leaving it fearing the Americans would simply steal for themselves. (Blanchett’s character is based on Rose Valland, whose own memoir served as the basis for John Frankenheimer’s “The Train,” an equally fictionalized but much more exciting version of those events, and one of action from the 60s.)

Murray and Balaban generally fare better, favoring a well-understated comedic chemistry and seemingly decided to make the most of their underwritten scenes. In one of the only moments of “The Monuments Men” that strikes a true chord, Murray receives a house recording of his grandchildren singing “Have Yourself a Merry Little Christmas” and Clooney holds the actor’s wonderfully emotional face. while Balaban plays the record for him at the PA barracks.

The real Monuments Men were men of great passion and a great sense of duty who risked their lives for art, but the film that Clooney and Heslov made is a strangely bloodless and conventional tribute, conscientiously directing itself towards an obvious destination with the expected parade of historical panels: numerous titles on the screen to signal the passage of time; occasional glimpses of Hitler overlooking a model of the Fuehrermuseum; the publication of the 1945 “Nero Decree” stating that if Hitler dies or Germany falls, all stolen art will be destroyed. Through it all, the movie never really comes to life, and it’s a particular disappointment on the part of Clooney, who is smart and tasteful and one of the only people in Hollywood today who can cast. a project like “The Monuments Men” in the first place. Ultimately, the art is salvaged, but the film itself remains buried.

The extensive special effects work that would have delayed the release of last year’s Christmas photo is, in the end, transparent to be seen. Composer Alexandre Desplat, who contributes to one of his more conventional scores – a John Williams-style Americana fanfare – also appears in a small role as one of Damon’s contacts in the French resistance. Heslov makes cameos as an army surgeon, while Clooney’s father Nick appears as an elderly Stokes in a 1970s epilogue.

Getting acquainted with “art” with the Nambucca Valley Art Appreciation…

The Art Appreciation Society is here to demystify art