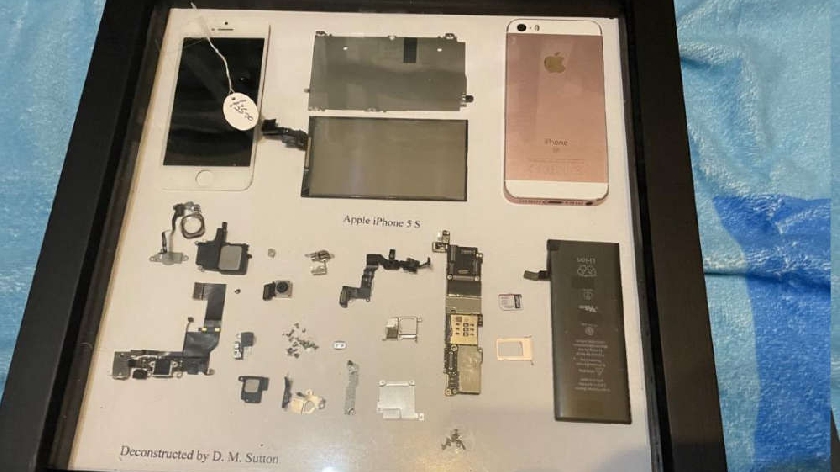 A grandfather and Milton Keynes veteran has turned old Freegle mobile phones into wall art – all to raise money to fight cancer in young people.

David Sutton, 69, from Westcroft, says: ‘When I retired I was bored sitting at home – about 7 years ago I attended local council run art classes and that’s what made me do things.

“Many old or damaged phones are thrown away or left in drawers and forgotten. I hate waste and seeing them thrown away, so I wondered if there was anything that could be done with them.

“I started making displays of them that show people the parts phones are made of. It’s amazing how many bits each one has. I posted them on Facebook Marketplace and to my surprise people have started asking if they could buy them. When they all sold out, I started making more!

“I needed more phones so I asked on Freegle if anyone had any other spare or broken phones and everyone was very generous. I scoured Milton Keynes to collect them.

“I’ve made about 20 now, and I’ve made all types of phones – from the oldest to the most modern iPhones. One of the most popular I’ve done recently was a Samsung Galaxy S6.

“I take the profit I make from their sale and donate it to a local childhood cancer charity. It gives a second life to the phone.

Michael Hoeben, 57, an accountant, who started the Milton Keynes Freegle Community and helps run it along with 3 other volunteers, said: “Freegle is like online dating for stuff.

“We love David’s project and are delighted to hear that he was able to breathe new life into these items, reduce waste and help those in need.

“I am from South Africa, and most items, from clothes to electrical appliances, were passed down through families and then to family friends or workers. So broken irons to socks with holes were immediately repaired or passed on to others for reuse.

“We’d love to hear how other locals have used Freegle to improve the community!”