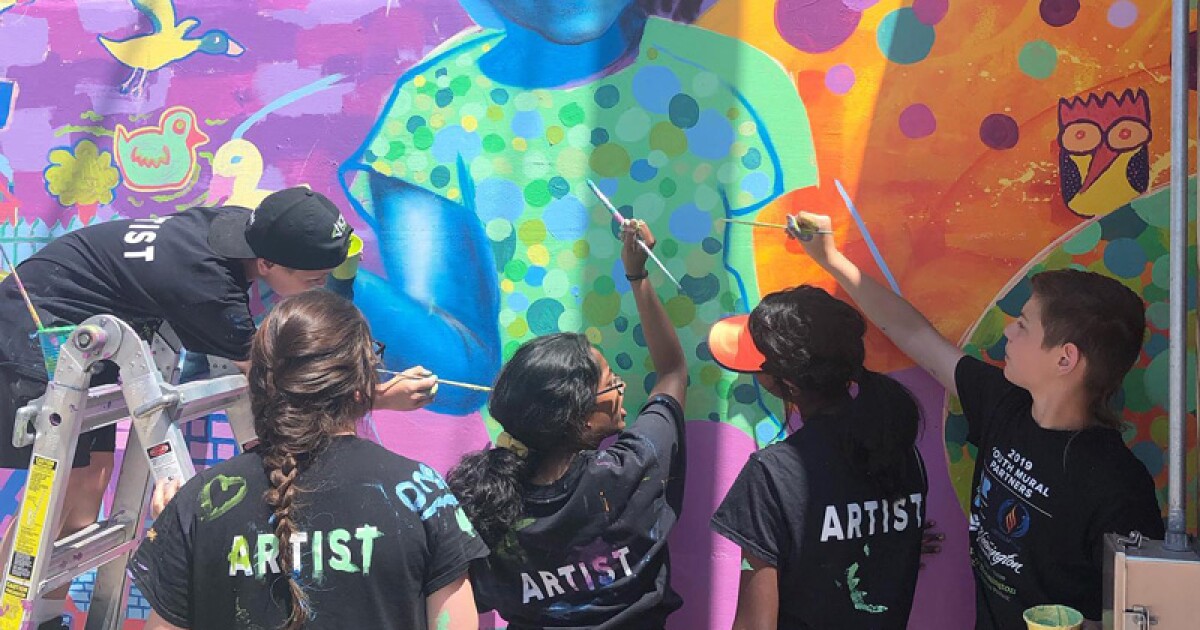 Youth art camps are already filling up at the Illinois Art Station. As the center turns the corner on a full year since moving into their new home on Vernon Avenue, new leadership from a familiar face in the Twin City arts scene is bringing the nonprofit back to its roots. communities and relaunches the mural project for the first time since 2019.

Beginning June 28, the Youth Mural Project brings together local youth, police and community leaders for two weeks of artistic creation, culminating in a public unveiling on July 9 and a performance in front of the new mural.

Previous youth mural projects have resulted in murals on Constitution Trail near Washington Street and at the intersection of West Market Street and Morris Avenue in Bloomington. The project’s multiple organizational partners include Artolution, BCAI Cultural Arts & Humanities, District 87, Western Avenue Community Center, the City of Bloomington, and the Bloomington Police Department.

“We’re really looking to highlight how anyone in our local community and beyond is creating safe spaces,” said IAS Executive Director Hannah Johnson, who spoke to WGLT on her second day on the job. .

“What does it mean to be safe, to feel safe, to make others feel safe? With our young artists and with our artist officers, we can build relationships,” Johnson said. “We can create something really beautiful and impactful that will continue to inspire dialogue.

Johnson succeeds Laura Jaster — who held the post for less than two years — as head of the fledgling nonprofit initially associated with Illinois State University. Johnson, a Bloomington native, previously worked as an education program coordinator at the McLean County Museum of History.

Johnson sees the move from history to visual art as a natural extension of her upbringing. As the child of two theater artists immersed in the Bloomington-Normal art scene, the arts are part of Johnson’s DNA. She said visiting friends as a child helped her realize that not everyone’s walls were covered in locally made art.

“You kind of start to realize that our situation might be unique,” ​​she said.

Johnson attended schools in District 87, graduated from Bloomington High School, and has two history degrees: one from Illinois Wesleyan and one from Illinois State. Prior to working at the McLean County Museum of History, she completed internships at the David Davis Mansion and the Dr. Jo Ann Rayfield Archives.

“What’s so great about the McLean County Museum of History is that it’s all local,” Johnson said. “You build community, you build identity as you move. That’s what really captured my interest (at Illinois Art Station) and built on my previous experience.

While executive leadership is a new challenge for Johnson, she said the many hats she wore at the museum fully prepared her for the IAS. Johnson joins program coordinator Joey Hatch, the only other full-time staff member.

“At any time, I can get pulled into a program, and all of a sudden I’m doing art with kids,” Johnson said. “And then the next minute I might meet with a donor or submit a grant. That was really the relationship I had with working at the history museum.

The timing of the Illinois Art Station’s expansion during the pandemic could be considered a plus. In a previous interview, Jaster told WGLT that they planned to grow slowly after moving into the new building in 2021, and so weren’t hampered by capacity limits or previous precedent during the height of the COVID-19 pandemic.

Johnson agreed and also said “the numbers are there.” Its main goals are to continue to raise awareness about IAS and leverage its deep community ties.

“Illinois Art Station has always had local support. When it comes to people in the leadership role, though, I’m the first to be a Bloomingtonian,” Johnson said. “This is not a criticism of anyone who has come before. I think it’s a testament to the opportunity and excitement around this organization that people were literally willing to move in and uproot their lives to come and serve. … It took me over 30 years to put together this overview, so I really hope we can see what piece of the puzzle Illinois Art Station is with our other local arts partners.

A highlight of IAS’s colorful and airy new building along Constitution Trail is the gallery near the front doors, which features a rotating display of art installations by and for children. Johnson believes that legitimizing youth artistic production is an essential part of cultivating a healthy community. Also, working with children feels good.

“There’s always potential in any child,” Johnson said. “Even on the worst day — even that kid who’s the grumpy Gus in the room — you know you can turn things around.”

Spaces remain for Art in Plain Sight on June 6 in partnership with Miller Park Zoo and for smARTs Camp July 25-29 on Neurodiverse Artists for 11-14 year olds. The community unveiling and performance of the Youth Mural Project will take place on July 9th. More information at illinoisartstation.org.