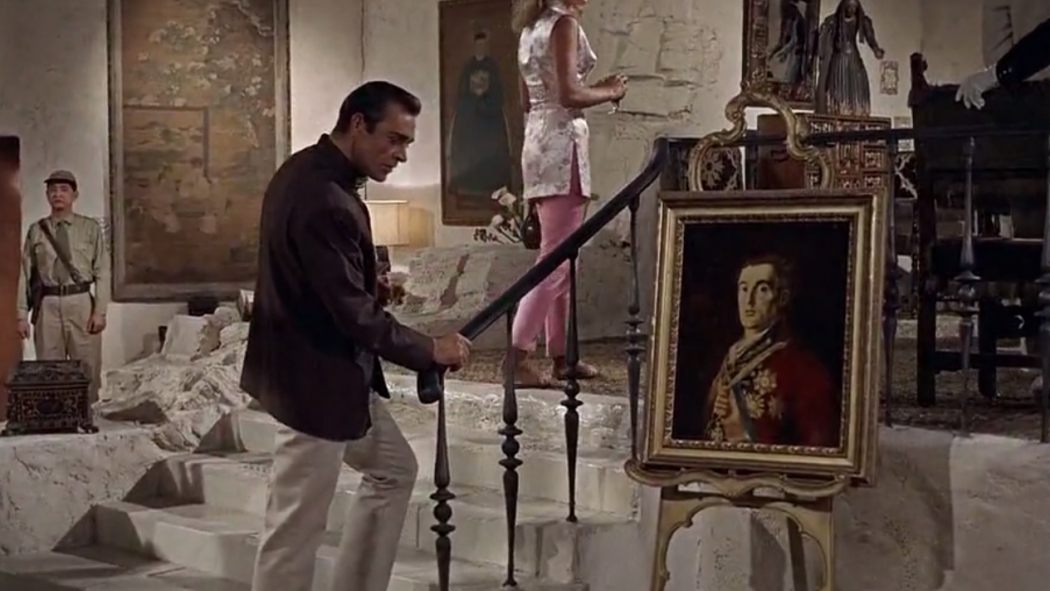 The titles in this column are often a challenge, because let’s be honest: there is never a unifying theme. This is all the Bond related nonsense that I would normally tweet to the faithful, but didn’t justify his own post. But this week, at least three of the things I wanted to share with you relate to artwork, so that’s what we’re going to do for the title. Thank you for your understanding.

I just took number 1 from Jimmy’s Bastards by Garth Ennis (Preacher) and artist Russ Braun, and it sounds like Ennis has seen the nasty streak exposed in the Mark Millar movie Secret service and said “hold my martini.” And friends, I dig it. Jimmy’s Bastards features a very Roger Moore-esque and fun secret agent named Jimmy Regent facing colorful enemies, meeting new partners, and perhaps baiting both sides of the socio-political climate we find ourselves in. Looked:

And then there is this …

Something for everyone. The premise of Jimmy’s Bastards is kinda right there in the title, but it’s also a big reveal on the last page, so let’s just say it’s a very logical turn of events for MI6’s most promiscuous spy. I am addicted.

Here is a whisper of Link 25 speculation: Paramount has sign to distribute this OTHER Eon assassin thriller The rhythm section, and as some of our commentators have pointed out, The Late Show with Stephen Colbert (where Daniel Craig officially announced his return last week) is owned by Paramount’s parent company, Viacom. Does this indicate Link 25 land at Paramount? Of course, as much as anything points to anything at this point. Our helpful commentators also pointed out that Megan Ellison’s brother is based in Paramount, so his retweet from last week may have just been brother support…? Who the hell knows.

Last week I showed a photo of an upcoming movie memorabilia auction for the Royal Navy Commander’s cap worn by Roger Moore in The spy who loved me. Inside the hat was the name of its maker Savile Row.

Well did you know that Gieves & Hawkes is still in business? And that they’ll, for a fee, mail a Royal Navy commander’s cap to, like, anyone? I mean, that’s what I heard, anyway.

Matt and Matt have a new James bonding and in this episode, they design (with the help of Paul Scheer) a James Bond theme park from scratch. It’s a pleasure to hear, and Matt Gourley even created some amazing concept art:

I’m not a theme park guy but I love the direction this business is taking. Give it a listen.

Did I mention that I have the best colleagues in the world? We tear each other apart and meet again, but I’m really lucky to have people like Meredith Borders, Scott Wampler, Jacob Knight and Evan Saathoff in my life. It’s so nice to work with people who are also legitimate friends, and who only GET you.

My birthday isn’t yet a few weeks away, but it arrived in the mail yesterday and it’s, without exaggeration, one of the most thoughtful gifts I’ve ever received:

Damn, I’ve never looked so good. I am touched, humiliated, honored, narcissistically tickled – this gift is everything. It’s even cooler that this original piece commissioned by my dear friends is created by my “Bond brother”, the amazing Ibrahim Moustafa, an artist I’ve been a fan of for some time. Ibrahim tells me this piece was inspired by Bob Peak unused poster art for License revoked (later renamed License to kill). I can’t think of any higher honor. If you are a Bond fan you should definitely take a look at Ibrahim’s stuff. here and particularly here.

Sorry to end up on a brag, but that’s where the day ended! If this is any consolation to you, know that it is also my sincere wish that you have the same quality people in your life as I do. It makes everything a little better.

Display your own artwork in a gallery