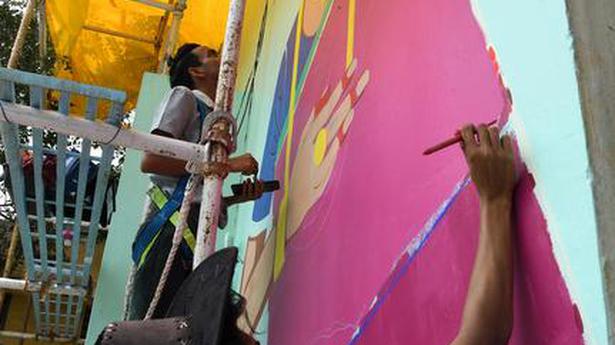 Part of the wall of a Jawans’ Bhavan building on Huzur Road radiates bright colors. Across the street, the exterior wall of the city police commissioner’s office building that faces the road is also getting a facelift.

Sitting on scaffolding to paint the highest parts of the walls, artists from the St + art India Foundation, who in the coming days will create a ‘Pedestrian Art Trail’ encompassing the district library building near the City Hall, State Bank of India Road and Arts College Road.

The artists will create works of art on the walls of selected buildings to “enrich the cityscape with street art,” said a statement from the Foundation.

Mr Payyapilly says the team is drawing a picture of a woman holding ‘yali’ in one hand and a basket in the other.

The basket contains cotton, banana leaves, flowers, etc., items that reflect the tradition of Coimbatore. As for the colors on the woman’s sari, they chose the colors they saw on the tower of the Koniamman temple.

Ms. Philip says that by staying closer to the temple, it was easy to observe the color pattern and reproduce it in their painting.

“The woman with ‘yali’ in one hand and flowers and banana leaves in the other must convey her strength and tenderness at the same time,” adds Mr. Payyapilly.

The Payyapilly-Philip duo had also researched the city when told about the street art project here. They started painting last Wednesday and it would take them another seven days to complete the job.

The statement said that through the paintings, the Foundation wishes to create a recognizable place in the city by developing works of art that celebrate the state’s vernacular stories, motifs and lost traditions.

Quoting Giulia Ambrogi, festival curator, St + art Foundation, the press release added that street art recognizes public spaces as a key space of values ​​in cities. The teams have made such works in various Indian cities and are supported by Asian Paints.

New works of art continue to appear throughout downtown, thanks to the city of Sarasota