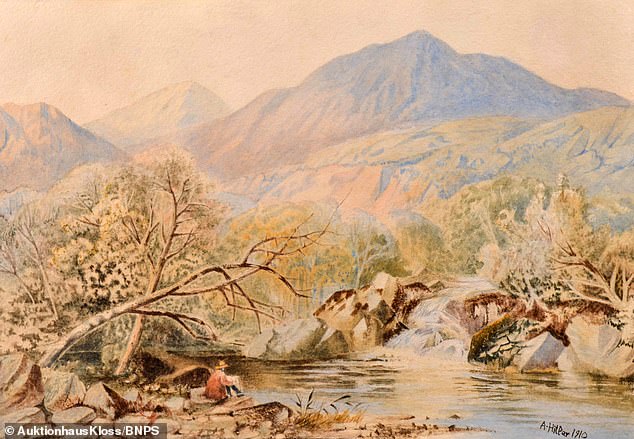 Artwork by Adolf Hitler when he was a struggling artist will go on sale in Germany for £ 15,000

Three paintings by a young Adolf Hitler, including one that may contain a self-portrait of the dictator, have been on sale for Â£ 15,000.

The watercolors depict idyllic valleys and mountains of the German Rhineland and his native Austria.

They are all signed ‘A Hitler’ and have been authenticated by a handwriting expert.

One of the paintings, titled â€œAlpenlandschaftâ€ or Alpine Landscape in English, shows a man sitting on a rock in front of a stream painting the scene in front of him.

‘Alpenlandschaft’ or ‘Alpine Landscape’, shows a figure painting the landscape. It is believed that this could be a depiction of a young Adolf Hitler at work

‘Niederthal, Vent’ – a popular ski spot in Austria – is one of three paintings by a young Adolf Hitler auctioned in Berlin

It is believed that this image of a painter sketching the landscape could be a depiction of the young dictator at work.

The other two works are titled â€œRheinlandschaftâ€, or Landscape with the Rhine, and â€œNiederthal, Ventâ€, a popular ski spot in Austria.

Each painting is individually valued at Â£ 5,000.

They are sold by the Berlin auction house Auktionshaus Kloss after being offered for sale from a private collection.

The seller had already bought the paintings from an Austrian estate.

The works of art of the evil dictator are allowed to be sold in Germany as long as they do not contain any Nazi symbols.

Despite this, a British art expert expressed his “surprise” that the sale continued.

“Rheinlandschaft”, or “Landscape with the Rhine”, is dated to 1910 and 1911, when Hitler was a 21 year old who was struggling to make a living as an artist in Vienna.

Signature of Adolf Hitler, authenticated by an expert in handwriting, on one of three paintings that emerged of the young Nazi leader for sale for Â£ 15,000

Michael Liversidge, Dean Emeritus of the Arts at the University of Bristol, said: â€œI am surprised that these paintings are on sale in Germany, because I have understood that Germans naturally do not look favorably on people benefiting from of this type of material.

â€œHitler did not enter the Academy of Fine Arts in Vienna and this judgment was made on artistic merits, but an interest remains among some collectors in his work. “

The FÃ¼hrer aspired to become an artist from an early age but was rejected twice, in 1907 and 1908, by the Academy of Fine Arts in Vienna.

He still sought to make a living as an artist, selling paintings and postcards, before enlisting in the Bavarian Army during WWI.

He reportedly told British Ambassador Nevile Henderson in August 1939: â€œI am an artist and not a politician. Once the Polish question is settled, I want to end my life as an artist.

Ina Hall, an expert from the Auktionshaus Kloss, said: â€œIn general, Hitler’s paintings rarely appear at auction, so they are highly sought after by collectors.

“Unfortunately, we really don’t know who the character is in front of any of the photos.”

â€œThe signature shows spontaneity, the correct size and the correct formation of the letters. He shows no sign of being pulled or forced.

“Based on the comparison and the inherent characteristics of the autographs, I believe this is an authentic item.”

In recent years, Hitler’s paintings have become popular among collectors, with his watercolor of the old Munich registry office selling for â‚¬ 130,000 (Â£ 114,000) at an auction in Nuremberg in 2014.

The sale of these recent works takes place tomorrow.

How it’s made: Inside Art Factory 44

Comment on an upcoming £ 66,000 piece of art in the business park

An insider’s guide to the artwork at the Ion

DeKalb senior recognized for his artistic work | The star