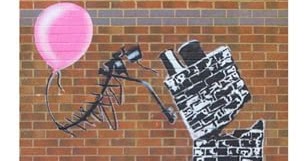 Appreciation of art on Coronation Street

Has anyone noticed the rise in art appreciation lately on Coronation Street? Not just the appreciation of art, but the actual artistic creation?

First, the mysterious Banksi-like graffiti appeared on Sally’s wall. Then we learned that it was part of the work of budding artist Craig, followed by his touching commemoration of the victims of the Victoria Court fire.

Next, we saw Cathy and Roy take an art class at a museum in Manchester, in which the two figures painted portraits. They walked home clutching their respective canvases, thinking of the possibility that the products from their DIY exercise would end up hanging on a wall in Roy’s apartment at a later date.

More recently, of course, we’ve seen art and flirting intertwine, as Craig encouraged Caitlyn to fulfill her dream of studying art history. She paid him the compliment by drawing it with the image of Munch’s Scream under a camping shower head. This somewhat awkward and endearing romance took place against the backdrop of Craig’s honest admission that he is averse to looking at himself in mirrors or taking selfies. Therefore, trusting Caitlyn enough to reflect him in the form of a picture was indeed a great confidence and a sign that he is now strong enough to make himself vulnerable to another person.

Clearly something is happening and, if the trend continues, we should expect a public display of artwork from the residents, perhaps revealing to us how they see themselves, their neighbors and the community in general.

I find this development really interesting. While this development was not as overwhelming as a streetcar accident, it had to be done. Otherwise, the characters risked living in a world too different from ours. At the same time, it’s interesting to wonder why this introduction of mainstream technology to the streets overlaps with a sudden focus on visual art. Well, on the one hand, yes, it’s a recognition of how our culture has become visual. While the street has always been covered with old posters and torn flyers, as a backdrop they mostly seemed blurry and hard to distinguish, a relic of crumbling businesses, such as grunge bars and strip clubs -tease. Now, on the other hand, we have Tracy Barlow standing in front of a glossy poster for the touring production of Wicked.

Another aspect to this is the recognition that visual images have a deep connection with subjectivity, in other words, they can serve as an outward representation of individual points of view.
We enjoy when Corrie’s writers demonstrate their mastery of a character’s way of being through dialogue, at best by highlighting an individual’s deep reflexes, idiosyncratic powers of observation, even devious, as well as sometimes exposing this character’s blind people. tasks.

It seems that in this new era of visual saturation, TPTB is exploring how to translate dialogue into pictures – for example, in this most recent scenario, not what Caitlyn would say, but what she would draw. It adds texture to how we get to know a character’s inner self, but also what it shows us about how characters are created. To the writers’ stable, Corrie has obviously added visual artists whose responsibility is to portray how Cathy sees Roy, how Roy sees Cathy, or maybe how they don’t see themselves. When art classes start at the community center, I suspect we’ll have some predictable results, such as quirky and flamboyant images of Mary, of Sinead’s art in the genre of her candles and beaded basques. But there could also be surprises from characters whose inner artist we haven’t met.

As Corrie strives to catch up with the influx of technology in everyday life, it would also be time for residents’ forms of artistic expression to expand from drawing, painting, not to mention Deirdre pottery, to more contemporary forms like video and music production. Amy Barlow, equipped with a digital camera, seems natural to shame her family with damning home videos. Faye has a bottled up inner life that she shared a bit with Craig, but I’d love to see how she could document life on the streets if she bought a camera from a helpful teacher in school, or, from. Elsewhere, what visual prizes Tim could offer if, in addition to his in-depth social knowledge, he added a photo hobby.

On the music side, while we have had scenarios in which Lloyd dragged his friends and family to live music events, as well as Ryan as a DJ, there has been far too little musical talent among the cast. . When Kim Marsh originally arrived, if I remember correctly, she sang at an audition for Vernon. Why hasn’t she had a showcase to sing in since? At the start of the show, the community regularly hosted musicals, pantos, talent nights, and attended chants by Ena Sharples, Rita’s sets at the nightclub, and appearances by Ernie Bishop as accompanying person. These scenes allowed the actors to display their considerable musical talents. If TPTB wants to hire pop stars to play characters in 2015, why not at least blackmail the characters on the show? Craig Charles was quoted in an interview as saying he was proud to have brought his personal passion for music to the character of Lloyd Mullaney, but shouldn’t the skills of the cast allow much more musical activity in general? Not just an occasional karaoke night at the Rovers? After all, you can learn as much about a character’s subjectivity from what they sing as you do from what they say or, in fact, what and how they draw.

Artlery – Appreciation of art for the masses | NewsWatch Review