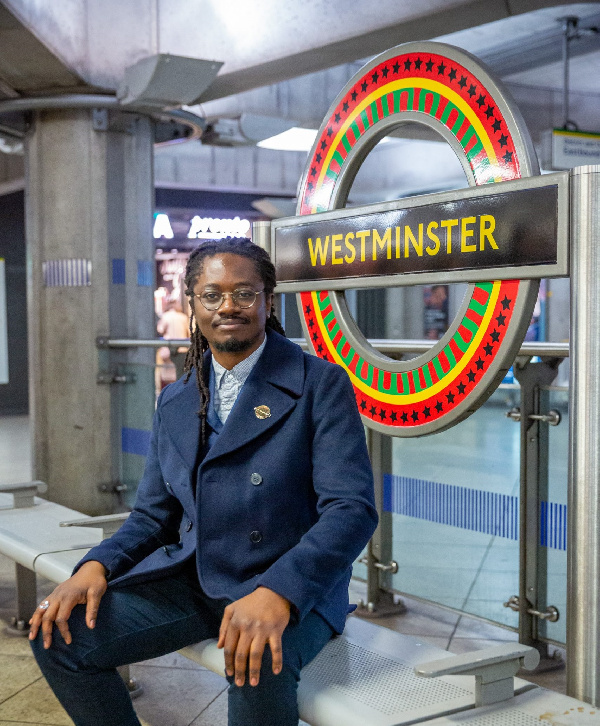 Larry Achiampong poses in front of his installation at Westminster Station

A young Anglo-Ghanaian artist is receiving a lot of applause for being the first person to have his work mounted at London’s famous Westminster station since 1908.

Larry Achiampong, who has spent most of his life in the UK after his parents emigrated to the country in the 1980s, said even geographical distance has not detached him from his roots.

It is this same inspiration and inherent spirit that gave birth to the roundel mounted at London’s famous station.

Speaking to Daniel Dadzie, BBC’s Focus on Africa, Larry said he was stunned to know he was making history with his artwork at Westminster Station.

“My mind really exploded because to be the first artist to show… art at this station, it only slowly started to sink in,” he said.

Westminster Station has one of the most iconic logos in the Underground system, part of London’s transport network, and it has welcomed millions of people to the Underground and influenced several other transport logos around the world .

Today, thanks to the creation of Larry Achiampong, an African flavor has been given to this ubiquitous place.

According to the BBC report, the colors of the roundel represent Ghana’s struggle for independence, its mineral resources, as well as its natural environment.

It also has 54 black stars which represent the number of countries in the African continent.

Commissioned by the Art on the Underground project, Larry has added to his many award-winning works, including films, photographs, sculptures and paintings.

Larry, whose parents inspired many of the things he does today, explained how his mother had an emotional moment when she saw his setup put together.

“She literally stood there and she cried,” he said.

The roundel is the only permanent pan-African art installation in the TFL underground station in London.

It is Larry’s hope that his installation will inspire an African artistic revolution at home and across the world.

With works that examine his community and personal heritage – in particular, the intersection between popular culture and post-colonial stance, Achiampong digs into the vaults of history. These investigations examine constructions of “self” by crossing sound and visual materials from personal and interpersonal archives, offering multiple perspectives that reveal deeply rooted inequalities in contemporary society.

Achiampong recently shot his feature debut and most ambitious film to date – Wayfinder. Set during a pandemic, the film follows the movements of its central protagonist – The Wanderer, a young girl (played by Perside Rodrigues), on an intrepid journey through England. Traveling from North to South, The Wanderer crosses different regions, cities and landscapes, encountering people, stories and situations along the way. Presented in six chapters, including “The North”, “The Land of Smoke” and “The Kingdom of the East”, this epic film builds a dialogue around themes of social and economic exclusion, belonging and displacement, cultural heritage and sense of home.

Recent projects include commissions with The Line, London; The Liverpool Biennial 2021 and Art on the Underground, designs by Roundel and a permanent sculptural intervention for Transport for London’s Westminster Underground Station, London (2019 and 2022).

Achiampong (b. 1984, UK, British Ghanaian) is a Jarman Award (2021) nominated artist. He received a BA in Fine Art in Mixed Media from the University of Westminster in 2005 and an MFA in Sculpture from the Slade School of Fine Art in 2008. In 2020 Achiampong was awarded the Stanley Picker Fellowship and in 2019 the Paul Hamlyn Artist Award in Recognition. for his practice. He lives and works in London and Essex, and was a tutor for the Masters in Photography program at the Royal College of Art between 2016 and 2021. Achiampong currently sits on the board of Iniva (Institute of International Visual Arts ) facilitating arts policy in the UK and internationally and also sits on the board of the Elephant Trust and is represented by C Ø PPERFIEL D.